When František Janeček left Tynec is unknown; however we know it was no later than

When František Janeček left Týnec in 1891, the village included 35 cottages and a population of approximately 220 people. The village was surrounded by farm fields, meadows, and forest land in every direction.

It is difficult to imagine what František thought

It is difficult to imagine how František felt leaving a place where he knew everyone and was surrounded by so much space, to living ~32 days with his only personal space being a cot stacked against a wall of a converted cargo hold of a steam ship. It is equally difficult to imagine his reaction when the S/S Havel entered New York Harbor 31 October 1891 to find a city of 1.7 million people. We can only assume that the size of the city, the number of people, along with encountering a new language and culture was quite a shock.

When the S/S Havel arrived in New York harbor on 22 Oct 1890, František cleared immigration at the newly opened Ellis Island. Castle Garden. Castle Garden was the immigration processing facility prior to Ellis Island opening in 1892. It is harder to imagine how František reacted the first time he exited the facility and stepped out into a New York City with a population of 1.7 million.

How František established himself in New York City is and will likely remain a mystery. It is unlikely that František had someone waiting for him once in New York. He indicated for the ship documentation that he planned to head on to Illinois, Chicago being a common destination for Bohemians immigrating to America. The reason why Frantisek opted not to continue on to Chicago is unknown, or if he ever really intended to go to Chicago.

It was rather common for immigrants to discuss “appropriate” answers to pass their immigration interview. It is just as likely that Frantisek was coached into stating he was moving on to Chicago because it had a large Bohemian population and would appear he had someone to help support him upon arrival. It is just as likely that Frantisek intended to go to Chicago, but stopped in New York for other reasons, such as lack of funds or simply wanted to stay once he arrived.

Regardless, once Frantisek left Castle Garden, we have no clues if someone was in New York to assist transition him, or if he had where he even resided till we encounter him again in 1894 when he completed his marriage license.

Frantisek Establishes Himself in New York

Like many immigrants, Frantisek would dissapear into the tennement houses of New York to emerge 3 years later when he married Marie Chara. What is Frantisek and Marie would take up residence in the Mott Haven neighborhood of the Bronx.

Even in the earliest documents, Frantisek indicated he was working at a tailor by trade. How Frantisek made the transition from working farms, to miner, to trailer is not known.

We also know from documentation that Frantisek worked for the J.L. Mott Corporation which was located in Mott Haven. J.L. Mott was known as a caste iron company who focused on producing bathroom fixtures, such as toilets, sinks, tubs, faucets, etc. The company also had a “Show Curtain Rod” department. This department produced large curtain rods that were used in theatres, Frantisek being the tailor was responsible to make the curtains that were made for the rods they sold. 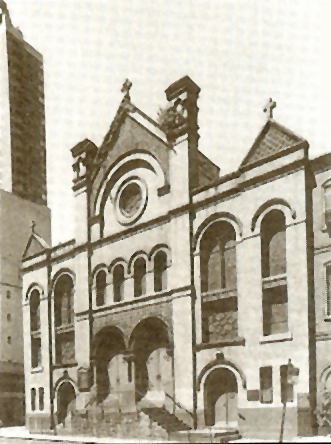 Our Lady of Perpetual Help Roman Catholic Church was organized in 1886 for Catholics from Bohemia. The church was located at 321 East 61st Street in New York City; an area with a large Bohemian neighborhood.

How František Janeček met Marie Chárová is unknown. Marie immigrated with her family to the United States in April of 1890. This is almost 2 years before František arrived in New York in October of 1892. However, it is quite plausible that František met Marie prior to leaving Bohemia.

The Chára family were also from Plzeň region of Bohemia. Like the Janeček family, the Chára family farmed in Bohemia for generations. Their farm was located in the village of Řesanice located only 15 km (10 mi) north of Týnec. This of course opens up infinite possibilities:

It is just as possible that that František was living in the same Bohemian neighborhood in New York City and where he was introduced to Marie.

Regardless of how they met, on October 21, 1894 – almost 3 years to the day that František set sail from Bremerhaven – he married Marie Chárová. František and Marie married in Our Lady of Perpetual Help Roman Catholic Church. The church was located on the upper east side of New York City at 321 East 61st Street.

On 8 February, 1897 Frank Janecek appeared before the Supreme Court of the State of New York in Manhattan. He filed what were commonly called “first papers”, the colloquial term for his Declaration of Intention. This was the first step in acquiring United States citizenship.

The application process required that an applicant had lived in the United States for a minimum of 5 years. Additionally, each state set their on minimum residency requirement, for the State of New York that requirement was 1 year.

On 15 July 1903, Frank returned to the East District of the United States to file his Petition for Naturalization. The court was located in the Federal Building and Post Office in Brooklyn. These papers were commonly referred to as “second papers” or “final papers.” These were the final step to complete the citizenship process.

These papers also included his signed oath to renounce the Emperor or Austria and King of Hungary and his allegiance to the Constitution of the United States of America.

František Janeček arrives in New York City aboard the S/S Havel and is processed at Ellis Island.

Mary Josephine Janecek is born to Frank Janecek and Marie Chara in the Bronx, NY. Mary was the first of Frank and Marie’s children.

Anastasia Janecek is born to Frank Janecek and Marie Chara in the Bronx, NY. Anastasia, known as ‘Stae’ was the second of Frank and Marie’s children.

Emma Janecek is born to Frank Janecek and Marie Chara in the Bronx, NY. Emma is the third of Frank and Marie’s children.

Bertha Janecek is born to Frank Janecek and Marie Chara in the Bronx, NY. Bertha is the fourth of Frank and Marie’s children and the last born in New York City.

Frank Janecek is Naturalized as an American Citizen

After filing his intention in 1897, Frank Janeček is naturalized as a citizen of the United States of America in New York City.

The J.L. Mott Corporation, Frank Janecek’s employer, announces they will move all operations to Trenton, NJ. The company will make this move over a period of several years as new production facilities are built. Frank and family move to Trenton, NJ in 1907.